Like other MOBA games like League of Legends, there are tons of characters, but not only that, each of the characters have their own skins to choose from. Skins are important to a free to play game like Arena of Valor because it’s one of the best ways that a player can express themselves.

Whether it’s paying for skins using real money or earning it through loot boxes or in-game currency, there are tons of skin options. This can make finding which skins to use for your favorite characters hard to figure out. But that’s where I come in with the top 10 best Arena of Valor skins list.

In this list, I’m going to go over the best Arena of Valor skins in the whole game. Players can struggle to figure out which skins to use since each character has so many options, and there are already so many characters to choose between.

The best Arena of Valor skins list is based on a number of factors. These factors include the overall appearance of the skin, how unique it is, how well it fits that particular character, and more. There are a lot of different ways to make a great skin, and I made sure to limit this list to one skin per character.

Because there are a ton of characters in the game, I wasn’t able to fit all of them onto this list. What’s great about how Tencent created these skins is that there isn’t any double-dipping of sorts where you’ll see the same skin repurposed for another character.

Without further ado, here are the top 10 best Arena of Valor skins in the game. 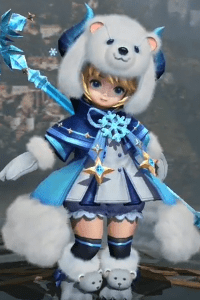 Alice is one of my mains in Arena of Valor, and her best skin is Fluffy Alice. Alice is already one of the most adorable heroes in the game, but Fluffy only cements her claim as the cutest character around. Fluffy has Alice don some winter garbs and show off her chilly side.

Alice is wearing a polar bear-themed outfit that is complete with a blue and white color scheme. The dress itself is great enough to stand on its own, but it’s when you add in the fluffy mittens and polar bear accents on the top and bottom of the dress that it’s elevated to a new level.

The polar bear hat is the metaphorical cherry on top of this skin, its contagious smile able to spread to anyone who sees it. At the same time, though, it is a little creepy the more you think about it. Regardless, this is one high-quality skin that you should take a look at. 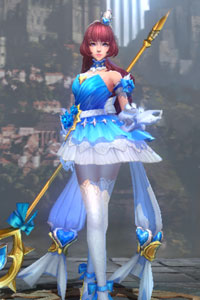 Prom Queen Diaochan continues the blue aesthetic from Fluffy Alice. Instead of winter clothes, though, Diaochan’s Prom Queen skin has her, well, get ready for the ball of a lifetime. The name isn’t an exaggeration, either, as anyone wearing that dress to prom is more than worthy of being crowned queen.

Diaochan’s Prom Queen skin is an elegant blue dress with smart accents that don’t make it too gaudy or trashy. It’s universal in its design, the only unique part being the bottom of it where it has an icy pattern. The decorations on her arms and wrists add a distinct touch, too.

The outfit is completed, though, by the simple but clean leggings and matching shoes. There are also two curtain-like blue streaks that run along the back of the dress that somehow don’t look as tacky as they sound. It helps that Diaochan’s hair is styled for the occasion. 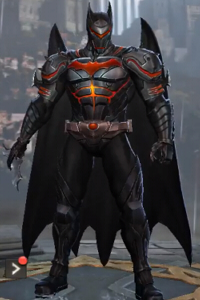 Taking a break from the more feminine skins for a moment, Hellbat Batman couldn’t be any more different. This skin for Batman takes the already surprising inclusion of this comic book superhero and twists it on its head.

The Hellbat Batman skin is, as the name implies, a villainous version of the classic hero. It looks like an alternate universe Batman who became an evil villain rather than a vigilante. For starters, his cape is sharp and sinister, giving off some Dracula vibes.

The outfit itself is a mix of different grays along with some lava-like sections here and there, such as the bat symbol in the middle of his chest. The lava red color is also in the futuristic mask that gives a different meaning to the “Dark Knight.” 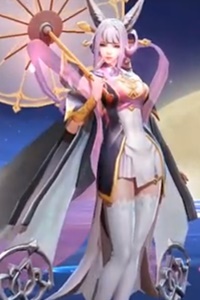 Liliana is already one of the best-looking characters in the entire game even before you consider her skins. However, her best skin, Mirage Liliana, is not one to be ignored. The fox-like aspects to Liliana are elevated with this glamorous Asian-inspired skin.

Mirage Liliana battles with a yin-yang element to it, featuring both black and white heavily in its colors. The white is prominent in the middle of her outfit as well as her leggings, with the black coming in on the outside portions of her outfit and arms.

Other skins of Liliana’s fail with her parasol, but that isn’t the case with Mirage Liliana. The parasol is even given proper attention, given a slightly translucent look with golden lines. Like with Prom Queen Diaochan, Tencent did a brilliant job with Liliana’s light purple hair. 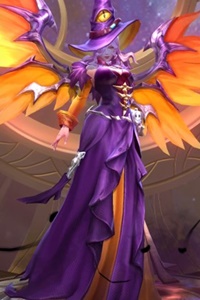 In a previous top 10 skins list, I mentioned how Fortnite failed with some of its Halloween skins. Well, thankfully, Arena of Valor didn’t mess up with its spookier skins, and Halloween Scream Zephys is one of the best Arena of Valor skins.

Zephys’ Halloween Scream is equal parts wonderful and terrifying. The outfit is the most lighthearted part of everything. It has an Alice in Wonderland feel to it, with a rich purple color and checkered patterns on his pants.

This is in stark contrast to the horrific jack-o-lantern that has replaced his head. Tencent didn’t hold back with this pumpkin head, making it as scary as possible. From the creepy smile to the little curve of the root on his head to the purple and orange weapons, this is one skin that is perfect for instilling fear in your opponents. 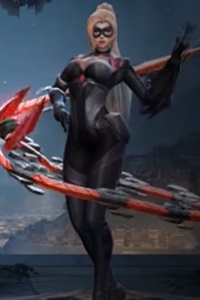 Veres doesn’t have many skins. In fact, she only has two, and one of them is her default skin. But Veres mains should be encouraged as her one optional skin is one of the best Arena of Valor skins overall. Grand Larceny Veres exemplifies her strong female power in multiple ways.

For one, Grand Larceny Veres honestly looks like a shameless ripoff of Catwoman in all of the right ways. The name of the skin seems to imply that this is the case, too. It’s actually a little weird since there are already DC Comics characters like Wonder Woman in the game at this time.

Whatever the reason may be for the Grand Larceny Veres skin, it’s well worth your money. The outfit is tight and all black, drawing heavy inspiration from the classic Catwoman look. The black mask across her eyes tops it all off along with white hair in a ponytail as opposed to her usual red hair. 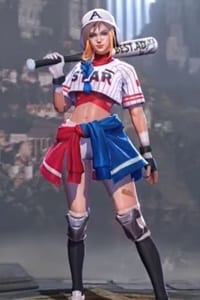 Even if you aren’t a fan of baseball (aka me), there is no denying that Slugger Astrid is one of the best Arena of Valor skins. In her default skin, Astrid is a traditional redheaded knight, but the Slugger skin makes her a baseball champion.

No longer does she wield a greatsword, as she has a slick metal bat in its place to pummel her enemies with. Her outfit is the traditional baseball uniform with sensual elements to it. The mostly white uniform is diversified with a red and blue sweater tied around her waist.

With the blonde hair and powerful attitude, Slugger Astrid seems like it is taking cues from another DC Comics character: this time, Harley Quinn. Unlike the previous skin, though, it isn’t a copycat but an evolution of the popular Harley Quinn look from the Suicide Squad movie. 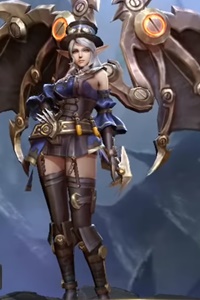 Steampunk Veera is one of the most original skins in any game ever. Normal Veera is a purple demonic character who you wouldn’t want to mess with. But the Steampunk skin for her turns her mostly traditional demon look into a steampunk one.

I mean, have you ever heard of a steampunk demon creation before? It’s a bizarre mix of hell and machine that somehow came out wonderful. Her outfit is mostly brown, with a more human face and hair than in her default skin.

Her wings aren’t nearly as sinister, either, looking like she crafted them herself out of wood, metal, and in the steampunk aesthetic. Steampunk Veera is one of the best Arena of Valor skins almost solely for originality’s sake. This is one skin that will have you stand out on the battlefield. 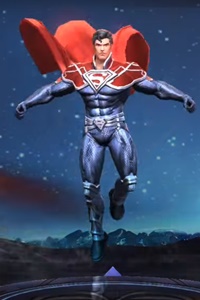 Whereas Batman’s Hellbat skin takes a look at an alternate, evil version of the hero, Godfall Superman does a different take on Superman. Comics in the past have delved into Superman’s potential God complex, and this Godfall skin exemplifies that.

Godfall Superman is what the hero would look like if he suddenly decided to use his powers to rule earth rather than save it. The bulk of the spandex suit is a shiny blue and gray color that emphasizes his abs more than ever before, too.

The top part of the suit, though, is a scarlet red from the signature S on his chest and up, including his cape. The change of red and blue gives this outfit a more villainous vibe. Godfall Superman shows that he means business and is one of the best skins for showing off to your opponents and teammates alike. 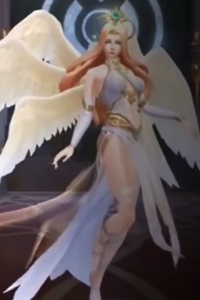 Some of the skins on this list have been beautiful and elegant, while others have had a regal, god-like feel to them. But there is one skin that takes all of those elements and wraps them up into one glorious package, and that is the Divine Grace skin for Lauriel.

Lauriel is already an angel who is at the center of the lore in her battle with the devilish Maloch and his evil companions, but Divine Grace Lauriel fully realizes this backstory. Divine Grace is one of the most stunning skins in the whole game, featuring a bright white dress that highlights her blonde hair.

Her white wings are also redesigned from her default Archangel skin to be six wings rather than two and with a look more akin to a traditional angel wing. This is all before including the glow around her head that shines for all of her opponents to see. Divine Grace is number one on the best Arena of Valor skins list for being the most cohesive, relevant to the original character, and beautiful skin in the game.